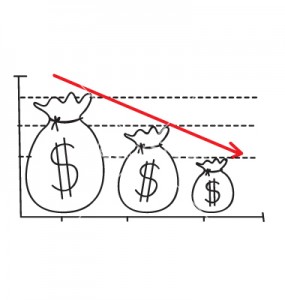 Article Written by : Debt Settlement Online
Loss is a fundamental fact of capitalism. When JP Morgan Chase lost $2 billion in 2012, the bank fessed up to the poor judgment and vowed to make things right. The business still exists today, so we know that loss can be a learning tool, something that informs us. Knowledge comes from our experiences, and we can only assess facts as they are.
However, when loss becomes “too big” there is a moral question of who’s responsibility the loss becomes. Taxpayers were made to bailout big banks during the recession because it was argued that the result of letting these banks, which had made poor investment decision, fail and die was far too risky to the American economy.
On one side of this argument are central banks, which economists argue serve the role of stimulating the economy. Central banks can play a beneficial role, but they can quickly become tools for government spending. In the case of bailouts, central banks wasted tax payer money on institutions and investors that voluntarily committed to a potential loss.
Investments are never guaranteed, so why should some institutions receive the benefit of a safety net when others are allowed to fail? This kind of bailout not only puts tax payers at risk, it also removes the incentive to succeed. If you know that you will be saved every time you mess up, so long as you have reached a certain level or status, you are less prone to continue innovating. Innovation and growth are absolutely essential to the existence of a free market.